A game that famously spent over three years in development at a time when such things were rare, as a result saw a relatively late release on the Famicom in 1992, Just Breed was also a cut above most RPGs on the platform.  A tactical turn-based experience to rival games like Fire Emblem or Shining Force, Just Breed carved out its own niche by having detailed graphics and fantastic music thanks to using the MMC5 chip, as well as gameplay that was downright impressive in scale, based around sprawling battles with dozens of units duking it out on both sides.  Each of the main characters is accompanied by up to five generic units, and each squad levels up as a group, so it definitely feels like you're commanding large army-versus-army battles and not just a small ragtag band of fighters.  It has a few quirks - the main characters take their move before any of their underlings can, and all characters in a unit do have to stay relatively close together, so traversing maps can be somewhat slow, especially if a couple units break away to deal with a lingering foe.  Protecting your main character is also important - if they fall, all of their underlings will retreat from the field, so you have to strike a careful balance between forging ahead with your squad leaders and not leaving them too vulnerable to the inevitable counterattack.  But while not flawless, Just Breed is an ambitious, surprisingly big (6 megabits!) and quite fun strategy RPG that pushes the Famicom hardware to its limits, and is well worth playing for any genre fan. 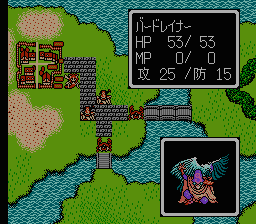