7th Dragon is pretty well-known name among RPG fans despite never being localized, probably helped by the prominent names on its staff; it's produced by Rieko Kodama (of Phantasy Star and Skies of Arcadia fame) and directed by Kazuya Ninou (director of Trauma Center and the original Etrian Odyssey).  As one would expect from the latter name, the gameplay is strictly old-school and very tough - grinding, spending skill points wisely and bringing a good supply of items to combat damaging enemies and status effects is absolutely essential.  Especially as dungeons are packed to the brim with HP-sapping flowers that can only be overcome through constant healing or having certain skills equipped.  Fortunately, some charming chibi characters and high-quality artwork, as well as a great soundtrack from the legendary Yuzo Koshiro, help to keep the experience fresh and playable even as it repeatedly pummels you into submission.  It is a bit of a shame that Sega chose to not localize this one for other territories (especially in light of numerous other successful retro-styled RPGs on the system), but there is a fan translation available for those looking for a challenging dungeon crawl. 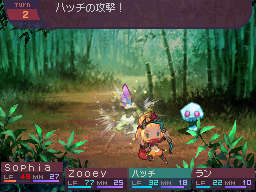