A mostly-forgotten Sega IP these days, Dark Wizard was an ambitious and complex strategy RPG for the Sega CD, and one of the few games in that genre on the platform.  But is this a lost gem from Sega, or was it left buried for good reason? 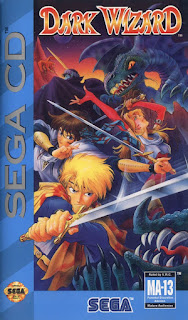 The Sega CD wasn't exactly a popular platform in its time; being an expensive add-on for the Sega Genesis rather than a standalone console, paired with unimpressive video streaming capabilities (64 colors, heavily compressed and almost never full-screen) and a marketing campaign mostly emphasizing its crappy FMV games, didn't win over too many gamers.  It had a few small hits in its time like Sonic CD, Lunar 1 and 2, Snatcher and Night Trap (though in Night Trap's case, it was mostly brought on by congressional hearings about "graphic violence" and "sexual content" that didn't actually exist), but for the most part gamers were unaware of the Sega CD, and most of those who did know of it would probably tell you you weren't missing much by skipping it.

Because of that, I didn't know of Dark Wizard until many years later, when Sega had quit producing consoles entirely and was now a third-party developer.  And I was a bit surprised to find out that it wasn't a third-party game from some studio I'd never heard of; it was a first-party Sega title.  Yes, even Sega themselves didn't seem to have any interest in promoting this one, and they haven't done anything with the IP since either, which was very strange indeed.  So naturally, I had to give it a chance and see what was up; was it really as bad as its lack of coverage would suggest?

Well, upon starting it up you immediately see that this is "A Kenji Terada production" - a name you may recognize if you're a long-time RPG fan, as he was a scenario writer for the first three Final Fantasy games.  He's also contributed to numerous anime franchises and OVAs made in the '80s and '90s, so he's actually a fairly prolific if not especially well-known creator.  Dark Wizard, being a CD game, afforded him an opportunity to work in some more of his writing skills, as it contains four characters to play as, each of whom have their own motivations and (surprisingly lengthy) animated cutscenes to set up their storylines.  The actual animation is very limited during these, but it looks clean and sharp (avoiding a common pitfall of full-motion video on the platform), and even the voiceover surprisingly isn't bad for the most part; it's not professional, but it's at least not an earsore to sit through.

Gameplay-wise, Dark Wizard is kind of a mashup of Fire Emblem and Master of Monsters.  Your main character serves as a powerful unit in their own right, able to cast devastating spells and having stats well above their troops, but their defeat will also instantly end the mission so you can't rely too heavily on them.  To aid you in battle, you can stop at castles and summon monsters, or pay money and a subsequent salary each turn to hire humanoids (Human, elf, dwarf or hobbit).  Monsters are relatively powerful but don't have a lot of versatility, while humanoids can be powered up and change classes as the player dictates, and can utilize equipment and items to further bolster their abilities.  Classes in turn fall under one of three basic archetypes - fighter, mage and priest - though the unit's alignment will also play a factor in their exact class path and abilities learned.  For example, neutral fighters are Archers who can wield bows and attack at range, while a lawful fighter becomes a Knight and eventually a Paladin as their levels increase.

Units are further differentiated by strengths, weaknesses and movement abilities, and they all calculate out to some fairly complex charts.  Humanoids as a rule move best on roads and plains, and are severely slowed down by other terrain (mountains) or are just completely unable to enter it (water).  Monsters are more versatile here; many can move through woods more efficiently, Hydras are slow on land but move very fast through water, while flying units (like Chimeras) aren't slowed by terrain at all and are very good at picking off lone units.  Units also have very distinct advantages over others - Dragons are very deadly against most monsters but significantly less effective against humanoids, for example.   This is easily the game's most complex element, and keeping track of it all in your head is pretty infeasible, but the game does thankfully provide charts on demand so you can keep up on which units are safe to send into a particular battle and which ones should hang back - particularly important as dead monsters are gone for good (as are all the experience and levels they've gained) and resurrecting deceased humanoids is quite costly.  And you'll need all the leveled-up troops you can get for later missions.

Aside from large-scale battles, Dark Wizard also works in a bit of a management element to your campaign.  You'll have to leave behind units at captured territories to prevent enemies from retaking them (and having to fight another long battle to take them back).  One can send out a small group of units to recover items or follow up on leads given in towns that can lead to sidequests, though some particular races may not be welcome in some areas - an incentive to diversify your teams.  During battles, your main character can even visit towns along the way, letting them purchase items, upgrade equipment, and even partake of some more traditional RPG mainstays - resting to recover health and visiting villagers in pubs, taverns and churches to get clues and uncover leads for sidequests.  Each map has hidden items to discover as well, though you may want to rely on a guide for this unless you really like painstakingly using the "Search" command on every single hex of the map.

In terms of presentation, Dark Wizard is serviceable, but unremarkable.  The Redbook audio soundtrack is well-composed but not particularly memorable, and the graphics, like Master of Monsters, are minimal but effective, letting you quickly identify units and terrain types.  There are Fire Emblem style cutscenes when units clash, but these aren't too impressive-looking, and the load times they add ensured that I turned them off after only a short while.  Even the game developers subtly tell you to do this, as the default setting in the options menu is to have the battle results print out in text instead.

So, for a game that was barely acknowledged in its time and is still rarely mentioned even today, is Dark Wizard a hit or a miss?  Well, I don't think I'd quite call it a lost classic of the genre, but it is a competent and entertaining strategy RPG.  It's got plenty of content between its side missions, story beats and battles that can easily last over an hour apiece, its four playable characters and the distinct story beats and abilities they each bring give it a fair bit of replay value, and there's enough complexity to its mechanics to appease die-hard strategy fiends.  It's on the spendy side these days, but if you're a fan of these kinds of titles, Dark Wizard is nevertheless one you might want to check out. 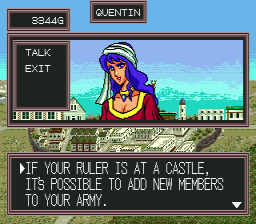 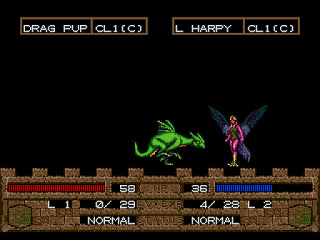