A remaster of the low-key hit Nier, which proved to be the last game released by cult company Cavia before their closure.  But does Ver 1.22474487139 prove to be a worthy update to the original cult classic, or should fans simply stick to the original? 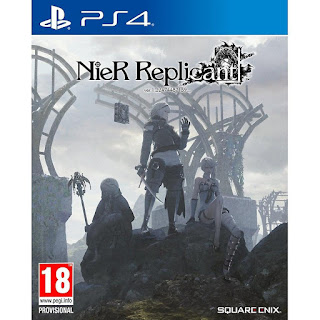 Cavia as a company was a pretty low-key name for a lot of its existence, mostly known for producing licensed titles and a few originals like Drakengard, which were largely regarded as mediocre save for their grim storylines and twisted themes.  NieR was the last game they released before being absorbed into their parent company (who would later merge with Marvelous Entertainment to become Marvelous AQL), and like many of their original offerings, its reception was muted at first; however, it went on to become a cult classic for its grim, emotional storytelling and innovative narrative design, probably helped in no small part by the runaway success of its sequel, NieR Automata.

NieR's original release was an odd one, though, owing to some regional disparity.  In Japan there were two versions that differed slightly; "NieR Gestalt" was released for the XBox 360 and had the player control Yonah's father, while the Playstation 3 got "NieR Replicant" and instead had them play as Yonah's brother (a much more bishonen design).  However, when the game was localized for other regions, we only got Gestalt's protagonist regardless of platform choice.  The narrative and gameplay was nearly identical regardless, but it seemed that Square was trying to appeal more to a Western audience (whose games, movies, shows etc. generally feature older protagonists) when the game was published outside of Japan. 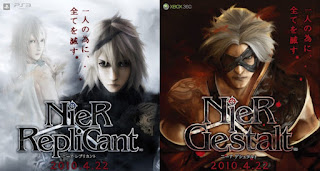 The 2021 remaster, however, goes in the exact opposite direction, only affording you the opportunity to play as Yonah's brother, with the "dad" protagonist making an appearance in some of the game's added content.  The story has also had some new scenes added - some that were intended for the original game but cut owing to time constraints, and some new scenes that help bridge the story gap between the original NieR and Automata.  They do a surprisingly good job with it too, as it all feels natural and well-integrated; more than I can say for the added content in games like Final Fantasy and some of the more recent Atlus outings.

Another point of criticism for the original NieR was its rather bland visual design; environments were large and empty and combat animation was rather stiff.  This of course gets updated in the remaster too; while the environments' designs don't change in any significant way, they definitely take advantage of the added technological power of modern platforms, with much nicer-looking textures, flora and fauna seeing a new level of detail, and more expressive character animation on the whole.  The overall style also more closely matches Automata's, with a dark-clad protagonist standing out against the lighter washed out environments.  It looks really good for the most part, though some of the more distinct character designs (Grimoire Weiss in particular) don't stand out nearly as much, going from a black-and-gold motif to looking flat gray in most shots.

The voice acting for the remaster was also overhauled, with the protagonist getting two new VO's (Zach Aguilar and Ray Chase); no surprise given the age shift.  Nearly all the dialog in the game is now voiced as well, with many actors from the original reprising their roles - definitely a good thing to most fans, as the voice acting was one of the major highlights of the original NieR.  Liam O'Brien in particular is perfect as the arrogant Grimoire Weiss, while Laura Bailey's Kainé perfectly captures the pain and angst of her character and the tragedy she's endured.

Probably the most significant change overall, though, was the revamped combat system.  While not hugely different from the original NieR, Replicant 1.2's physics and overall feel have received a major overhaul under the supervision of PlatinumGames' Takahisa Taura, who also worked on Automata.  The result is certainly evident, too - combat went from being a stiff, tedious affair to feeling much more fluid and satisfying, with every blow feeling significant and affording the player the ability to seamlessly switch from attacking to effectively dodging, parrying and countering enemy blows.  As in any good combat-focused action title, one can also easily switch between ranged attacks and melee owing to the intuitive setup, using the shoulder buttons to govern blocks, parries, ranged projectiles and stronger ones that must be charged up before firing but do significantly more damage.  It's still not on the level of depth as something like, say, Devil May Cry or Bayonetta, but I actually ended up looking forward to battles instead of dreading them, so it's still a major improvement over the original.  One can also now access items (both healing and temporary buffers) and change up their special attack selections via a D-pad quick menu, ensuring that the player is never drawn away from the combat for long.

One must keep in mind that the core game is essentially the same despite the remaster, though.  So it's got a lot of the same faults that befell the original - somewhat clunky physics and movement, a lot of rather boring sidequests and sub-missions (many of which just feel like filler meant to make the game longer and add achievements rather than feeling rewarding to do), and a fair bit of tedious farming being required for some things.  That said, one can ignore most of the sub-missions if they wish to and still get the full story experience, so only die-hard completionists need to deal with these.  One must also play through the story a total of four times to see everything; not just the four endings, but several new story elements are also revealed through subsequent playthroughs, with a fifth and new ending added for this version.  So even if you do only bare-basics to complete the main story, it's a fairly time consuming experience if you want to see all NieR's narrative has to offer.

In short, NieR Replicant 1.22474487139... is an excellent remaster, taking a cult classic game, keeping everything that made it such and improving upon several things that drew criticism in the original.  It's still the same game at its core, but with smoother action and combat, nicer visuals on the whole and some very well-integrated new elements, there's a lot here to enjoy for fans of the original and newcomers alike.  If you skipped the original NieR or just found it too clunky to be fun, give the modern remaster a go; you'll see why it's so beloved amongst fans of strong, emotional storytelling in games. 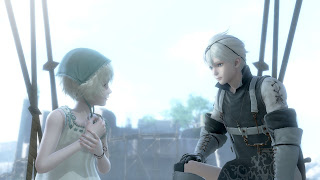 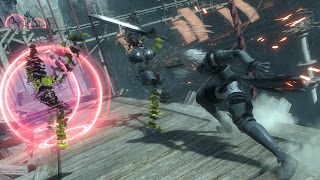 Developer: Toylogic
Publisher: Square Enix
Platform: Playstation 4, XBox One, PC
Released: 2021
Recommended Version:  The console versions seem to be more or less the same.  However, there are reports among some users that the PC port features bugs and bad optimization as that platform's port of Automata did, so keep that in mind.