One of the earliest RPGs for the Playstation to get critical acclaim, as well as one of the first RPGs on the platform in the west, period.  But does Wild Arms still prove to be an entertaining title, or is this one that's simply overshadowed by what came later? 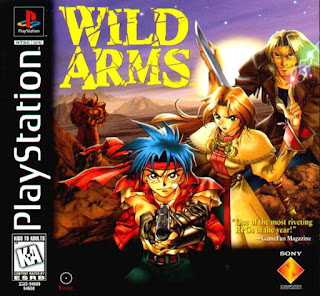 Early Playstation adopters that were fans of RPGs found themselves in a tight spot; Sony, itching to show off the 3D and media playback capabilities of the platform, was famously averse to releasing RPGs on the system and games with 2D graphics, which didn't bode particularly well for genre fans.  However, they did eventually relented on this policy, allowing games like Suikoden, Castlevania: Symphony of the Night and Wild Arms to be released and finally giving fans something better to play than Beyond the Beyond (shudder).

Because of that, Wild Arms quickly made itself into a fan favorite, as it maintained much of the feel of a good 16-bit RPG in its design.  Colorful and detailed visuals with 2D sprites, a surprisingly strong soundtrack, and dungeons that shared elements with the classic Zelda games, having the player use a variety of "tools" to clear obstacles and solve puzzles in order to make their way through.  Bombs to blow up rocks, grappling hooks to cross over gaps, a lighter to burn things and lamps, and even Jack's sidekick, a mouse named "Hanpan" that can cross over gaps to activate switch and safely open trapped chests.  As one would expect, more of these are unlocked as the story progresses, keeping the puzzles varied and fresh throughout.

Wild Arms for the most part is a linear adventure, though one element that set it apart from some is that its main characters have a small solo introductory quest before the main story proper begins, giving the player an introduction to their character, motives and unique mechanics.  After that they travel together for much of the game, though there is the odd dungeon here and there that requires them to split up and solve puzzles separately so that the others can advance (with the player able to swap between them at set points).  While there are only three playable characters in Wild Arms, they do have quite distinct abilities.  Rudy is a relatively well-rounded character in terms of stats, but cannot magic.  However, he does wield ARMs, which have a limited number of shots and are consistently expensive to upgrade, but are quite powerful.  Jack utilizes a number of sword-based techniques that inflict elemental damage, status effects and have other special traits.  Cecelia utilizes both offensive and supportive magic, though in a somewhat unconventional way - rather than simply learning spells through levels or as the story dictates, one finds "Crest Graphs" as they adventure, which can be used to pick any of 32 spells (which later expands to 64).  These can also be cleared and reused, so essentially, you don't learn new spells as much as you expand how many you can utilize at a time.

Combat is a traditional turn-based system, but works in a few twists of its own.  As an odd contrast to the overworld and dungeons, which use 2D graphics, combat scenes are rendered entirely in 3D, with a constantly-panning camera to give the action a more dynamic feel.  Another prominent element of its design which would become a series staple is the Force meter, which fills each time a character takes an action or is hit by an attack, and enables special abilities to be used.  Rudy can fire his ARMs with 100% accuracy, for example, while Jack can take his turn first regardless of the other combatants' speed (an important tactic in some battles).  Cecelia has an interesting one too, able to pick an item and "draw magic from it" - for consumables, this usually means giving their healing/restorative effects to all allies rather than just one, while with weapons and armor it can cast various spell effects without using MP - dealing damage, putting up defensive barriers and so forth.  More of these are unlocked as the story progresses, though one common to all three characters is the ability to summon Guardians from runes, which often perform powerful elemental attacks in exchange for 50% of the Force gauge.  In addition, once the bar fills up to 100%, this activates "Condition Green", instantly clearing any status effects on the character, so it is beneficial to store power at times and not just spend it whenever you get the chance to perform a powerful attack.

Wild Arms is also noteworthy for having more bells and whistles than many other RPGs of the period.  Taking the window customization options from Final Fantasy even further, one can actually edit them pixel-by-pixel with the game's built-in editor and even save them to their memory card, keeping it throughout that entire playthrough if they wish.  This even extends to the UI icons too, so if you find the standard ones to be a bit hard to read, you can go ahead and make your own.  It's also the only RPG franchise I know of to have its own built-in screensaver, which the player can even set the timer for (defaulting to five minutes).  Between that and the quite well-composed music, it is a little odd that Wild Arms also utilizes so many stock sound effects, though I was rather amused at hearing a lot of sounds also featured in games like Doom and various cartoons from the era.

The game hasn't aged well in some respects, though.  The translation is notably quite spotty, feeling like the developers just ran the Japanese script through an automatic translator and then pasted it into the game, with dialog often coming off as clunky and unnatural and some puzzles being rather unclear (and the game sometimes not even making it clear there is a puzzle in the first place).  I had to check a guide several times to progress for this reason.  Combat is also relatively one-note, with most enemies one encounters going down in only a few hits and few having exploitable elemental weaknesses or differing strategies required for most.  Dungeons also just tend to drag on for this reason, forcing you into constant fights with the same enemies and the same few puzzle gimmicks again and again.

Wild Arms definitely tries to put a new twist on many elements, but in the end, I just didn't have a lot of fun with it.  The lack of variety really drags the game out before too long, and the dungeons, while they have some creative puzzle-solving at first, soon give way to tedious, long-for-the-sake-of-length design.  Far too many block-pushing and wall-bombing puzzles with little thought required, as well as some that are just plain obtuse (having to talk to everyone in the dungeon, then use the rat on a particular NPC to get them to move aside.  And no, the game does not explain this to you at all).  It laid the groundwork for substantially better games to come, but as it stands, you're probably better off playing the remake of the first Wild Arms than the real thing; it hits the same plot points while incorporating many welcome gameplay updates from Wild Arms 3, as well as featuring a much better translation, and is much more fun overall. 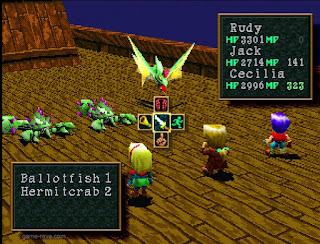 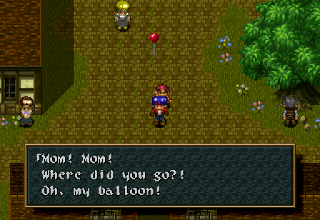