The Mega Man franchise, while primarily an action-based one, took forays into several other genres, from racing games to Zelda-styled adventures to CCG-RPG hybrids to even a kart racer.  Mega Man X Command Mission marks the X series' first foray into the realm of traditional Japanese RPGs; but does this title prove to be a worthy entry to the genre, or is this one spinoff title that should have never been conceived? 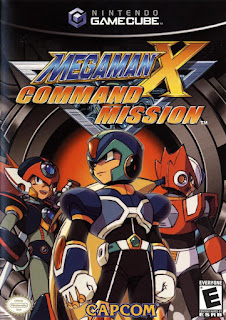 The Mega Man series, and the X series in particular, had fallen on pretty hard times in the early 2000s.  Wanting to take the series in a new direction, Keiji Inafune had intended to end the story of X with X5 and pick it up with Mega Man Zero instead.  But Capcom, never one to let a popular franchise fade, simply continued the franchise with no input from him, resulting in two games that deviated from franchise norms in numerous ways.  More importantly, though, they also saw a significant downturn in quality; X6 and X7 are widely regarded as the worst of the series by fans for their deeply flawed gameplay and overall uninspired design.  X8 was much better-received, but the damage was already done by then, resulting in the game getting only a limited release and capping off the X series for good.

In between all of that, however, there was also another X game that isn't as widely talked about.  While not the first Mega Man RPG (that going to the Battle Network spinoff series), Command Mission was the first to utilize a more traditional JRPG style format, rather than trying to work in strategy and collectible card game elements.  To that end, the game features the familiar cast of the X series, as well as four new characters, on a turn-based adventure that works in numerous puzzles, a turn-based combat system and even some mid-combat minigames reminiscent of the Final Fantasy series.

In spite of this, though, the game still retains a Mega Man X flavor relatively well throughout.  Rather than traditional healing items, the player gets a supply of sub-tanks that can be depleted to restore characters' health at any time, and which get small amounts of capacity restored after each battle, resting at an inn, or by hitting certain item crystals on the field.  Each character's Action Trigger ("Limit Break", more or less) is reminiscent of their action game counterparts; X's allows him to do a charged shot that hits all enemies for moderate damage, Zero can string together long combinations of melee attacks for heavy damage similar to Zell's limit break from Final Fantasy 8.  One notable missing feature, though, is that X does not get new weapons each time he defeats a boss; the closest you get to emulating that is with Axl, whose Action Trigger allows him to morph into defeated bosses for a single attack, allowing him to exploit elemental weaknesses more easily than most characters.  Though I do find it amusing that, in the game's final stages, one finds a series of teleporter hatches that lead to rematches with most of the old bosses again, just like most of the mainline games in the series.

In addition to the three protagonists of the main X series, four new protagonists round out Command Mission's cast.  Massimo is the archetypal tank character, having a lot of HP and able to absorb damage, but having only average attack power and a weakness to elemental attacks.  Marino more or less serves as the "thief" character with a high speed rating and the ability to steal items via her Action Trigger.  Spider is a gambler archetype who attacks with cards and utilizes a Poker minigame as his Action Trigger, and Cinnamon is a healer with relatively minimal attacking capabilities, but a powerful Action Trigger that lets her restore a large amount of HP to all allies without having to spend Sub Tanks.  Overall, they do their job well, rounding out a cast that shows a lot of the traditional JRPG archetypes, but without feeling out of place in the Mega Man X universe.

The overall gameplay of the game, however, is very similar to Final Fantasy X, released only a couple years prior.  Combat in  the game utilizes a turn-based system, with the player afforded opportunities to delay their later turns in order to unleash a powerful attack, or inflict certain attacks that can delay an enemy's turn until later in the fight.  Rather than traditional "magic", however, each character makes heavy use of their Action Triggers, governed by an action bar that fills 25% each turn; once it reaches 50% or more, they can then empty it to use their special move, with greater effects being earned the more full the bar is before activation; for example, X's charged shot will do more damage at higher percentages, with a guaranteed critical hit at 100%.  One can also spend a percentage of the action bar to activate "sub weapons", allowing them to do a bit of extra damage alongside their normal attack or activate some extra effects like gaining extra experience or lowering enemy stats temporarily.  These also serve as most characters' primary way to inflict elemental damage on enemies, letting them exploit weaknesses and deal extra damage.  Essentially, much of the combat comes down to managing each character's action bar, with knowing when to use sub-weapons as much a part of the game's strategy as knowing when to utilize one's Action Triggers.

Each character also has a special ability called a "Hyper Mode", which grants them a significant boost in power for a limited number of turns.  For X and Zero, these take the form of the series' traditional Armors and change up their attacks, with X's Action Trigger becoming a much stronger attack that hits only a single target, whilst Zero's is a straight power upgrade.  Others have some more nontraditional effects, with Spider and Axl becoming invisible (and completely invulnerable) for a short period whilst Marino gets a huge speed boost - often enough to take several turns in quick succession.  Two even more powerful forms are available for X and Zero, though as per RPG tradition, these require the player to defeat exceptionally difficult optional bosses to be unlocked.

Mega Man X Command Mission is an overall competent game, though its balance leaves some things to be desired.  For example, I almost never used Massimo; being able to tank damage helps at times, but his relatively low damage output, paired with a weakness to all outputs, severely limits his usefulness.  By contrast, Cinnamon becomes extremely overpowered in the late stages of the game; being able to fully heal the party every three turns or so makes most battles into a joke, as does Zero as a whole - his normal attack, paired with a midgame weapon that hits three times a turn and a sub-weapon he stats the game with, had me doing an absurd amount of damage by the end to the point where I didn't even need his Action Trigger anymore.  Basically, like many of the Final Fantasy games of the era, Command Mission becomes ridiculously unbalanced in its later stages, with a few members of the cast dominating while the rest gradually see less and less use.

A nice facet of Command Mission is that, unlike the two games that preceded it, this one does not skimp on the presentation.  The game is presented in full 3D as X7 was, with nicely detailed environments and bright, cel-shaded character models that actually look quite good on-screen and in animation.  But more importantly, the game features well-done voiceover by a professional cast - a nice change for a series that quickly became infamous for its awful VO (as many Mega Man 8 and X4 meme videos can attest).  Even the music is surprisingly good, keeping the energetic feel of the X series while not going overboard and becoming grating owing to the slower pace of the RPG format.

At the end of the day, Mega Man X Command Mission is an early 2000's RPG, hitting many of the design tropes of games like Final Fantasy X while working in a Mega Man X flavor to the whole thing.  It's by no means an outstanding example of the genre, but it is an overall competent RPG and a surprisingly decent Mega Man X game, particularly for the time in which it came out.  While there are many other games I'd recommend checking out first, this one is still worth a look for X series fans or just those with an interest in lesser-known JRPGs. 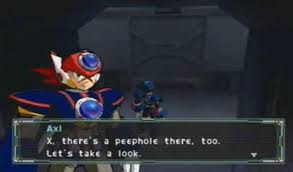 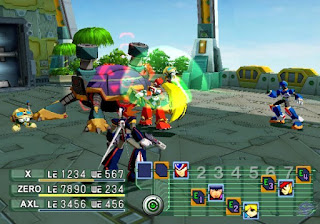 Developer: Capcom Production Studio 3
Publisher: Capcom
Platform: Playstation 2, Gamecube
Released: 2004
Recommended Version: Both versions are very similar, though I personally prefer the button layout of the Gamecube version.  Each version does have some exclusive content, however - the Gamecube version utilizes the Game Boy Advance Link Cable as part of a radar function to find hidden items (depicted onscreen in the PS2 port) while the Playstation 2 version has an unlockable demo of Mega Man X8 instead.  Experience penalties for taking too many turns to win a boss battle also seem to occur much more quickly on the Gamecube port for some reason.