Roguelikes are a genre that, for the most part, have been the exclusive domain of die-hard PC gamers because of their esoteric design, high difficulty and often minimal interfaces, as well as the fact that they require a lot of memorization, practice and sheer luck to successfully complete.  Hell, many of the more beloved ones don't even have graphics, just displaying abstract ASCII symbols representing objects in a console window, which only works to keep many younger gamers used to 4K HD graphics at bay.

Kingsway is another entry in this esoteric genre, and it hits all the usual hallmarks - randomized quests, events and dungeon layouts, exceptional difficulty (though with the option to play on a higher or lower setting), a strict time limit, and some rather cryptic mechanics and puzzles being required for full completion.  Unlike many of its PC brethren, however, Kingsway is a remarkably easy game to pick up and play.  This is largely thanks to its simple, intuitive interface, designed to resemble the desktop of a WIndows or MacOS-styled operating system.  Shops and inventory management are as easy as drag-and-dropping icons on the screen, while travelling and interacting with things in the environment are handled by simply clicking icons or text links, or right-clicking and selecting a context-sensitive action from a menu.  The graphics, limited mostly to simple MSPaint-styled drawings, and a handful of simple system sounds only add to this aesthetic, and even some of the clumsier aspects of old operating systems are captured, like only certain windows having hotkeys available; likely by design.

Combat is perhaps the most cleverly handled element of this gimmick.  Operating on a time-based system not unlike Final Fantasy's Active Time Battles, the player and any foes he faces all have an action bar that slowly ticks up and, once it fills, they are able to take a selected action.   Several actions the player can take can affect the timing of these bars, such as temporarily stopping an opponent's action gauge, performing a powerful attack that causes their next turn to come more slowly, or having an attack that quickly refills the player's own bar, but at the cost of some MP and dealing relatively low damage (useful for sneaking in a final attack on an enemy before they can land another hit).

The gimmick doesn't end there, though.  Scrolling pop-up windows appear during fights, allowing the player to avoid some enemy spells or negative effects like poison and confusion by quickly clicking the "dodge" button before their time bar fills.  Finally, some enemy actions also mess with your interface, doing things like minimizing random windows on your desktop, causing them to shake back and forth (making it harder to click the buttons), or summoning new enemies mid-fight to pop up more windows and distract you from the main target.  This adds a multitasking and twitch-based skill element to the game - fairly unusual for a genre known for being almost exclusively based on turn-based action and luck-based dice rolls.

Of course, the game does a lot to introduce replay value as well, as both a clever way to prevent players from getting discouraged after dying multiple times and to introduce replay value for those who successfully complete it.  Not only are there multiple endings, but after each game played (won or lost), the player will get a supply of Gems based on how far into the quest they got.  Gems can be spent at the main menu to unlock starting benefits - everything from having slightly more HP to some basic equipment to opaque items like the "Lucky Coin" that have unclear effects, but may just tilt the odds in your favor.  New classes can be unlocked as well - from the powerful Demonblood class that starts with a very low reputation to a rather inauspicious one called the "Worthless" that has low stats across the board and only one arm (preventing the player from equipping shields or orbs), these add some variety to the proceedings, as well as ways to make the game easier or harder at the player's leisure.

Building on this, the player also has the option to carry over one item to their next playthrough when they die, which can mitigate some of the frustration of being well-equipped but falling short at the finish line.  However, this comes at a price - the next character created must pick this item in lieu of any other starting bonus, or said item will be lost forever.  Gems can also be used to unlock other bonuses tied into the game's GUI - new hotkeys for menus different desktop themes, cursors and fonts, for example.  While these things ultimately serve no real benefit to the player (other than the hotkeys, of course), it does add nicely to the game's gimmick.

In the end, Kingsway proves to be a competent and entertaining roguelike, more accessible than most thanks to its intuitive interface and design.  It may not be opaque or challenging enough for the most die-hard of Rogue/Nethack/ADOM fans out there, nor will it likely win over anyone who dislikes roguelikes on principle, but it may just introduce a few new players to the genre and get them hooked. 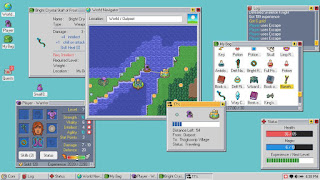 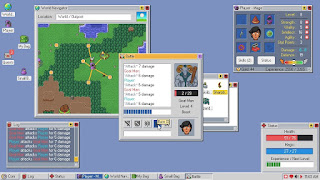