A surprisingly popular independent title from independent Turkish studio TaleWorlds Entertainment, Mount & Blade was dismissed outright by most professional reviewers for its low production values.  However, it built up a sizable fanbase (and modding community) online who found a lot to like in the intricacies of its design.  It certainly has a lot of appeal as a grandiose sandbox RPG; though there is only a vague overarching story about five kingdoms embroiled in constant war with one another, there is certainly no shortage of ways for the player to interact with its setting. You can travel about freely, recruit allies (both named and generic soldiers), undertake randomly generated quests, take part in battles large and small, and once you build enough of a name for yourself, you can even become a vassal to one of the five major factions and control a fief, which you can then manage and collect taxes from.  The character creation reminds me more than a bit of games like Elder Scrolls and Darklands (though not quite as in-depth as the latter, sadly), letting you shape your starting stats by picking elements of your character's backstory.  Combat in the game is surprisingly good, requiring a significantly more methodical approach than Elder Scrolls' mostly braindead battles - little touches like having to block after an enemy prepares a swing (lest you block in the wrong direction and get hit anyway) and adding extra damage while moving faster add a surprising amount of depth; and of course, aiming your attacks is much trickier while on horseback, especially with bows and thrown weapons.  The game isn't without its flaws - as mentioned, it looks very low-budget with a lot of very similar looking towns and scenery, NPC interactions are mostly utilitarian canned responses with little variation, combat gets overly repetitive and there's a lot of dry menus to navigate to carry out various tasks - but even with this, Mount & Blade built up a sizable fanbase.  Enough to get two standalone expansions (Warband and With Fire and Sword), several fan-made games that draw inspiration from its gameplay (some even using its engine) and, in 2022, a full-blown, much more lavishly produced sequel in Mount & Blade II: Bannerlord.  Certainly a game worth trying for fans of open-world/sandbox style RPGs, especially as it goes on sale often for only a couple dollars. 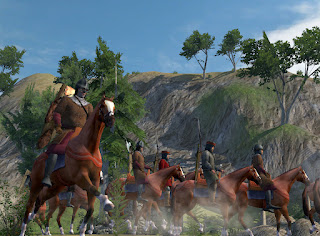