One of two standalone expansions for Mount & Blade, and unlike the others in the series it's loosely based on a series of real conflicts, beginning with the Khmelnytsky Uprising and Poland's subsequent wars with Sweden and the Ottoman Empire.  Being loosely based on the novel "With Fire & Sword" it features more of a running storyline depending on who the player allies themselves with, as well as restrictive character creation than the base game.  Guns (of the clumsy matchlock/flintlock variety) and similarly primitive grenades are more prevalent than bows in the setting, and fist-fighting is now an option; both as a desperate last resort in battle and as a way to challenge people to brawls.  Combat is a bit more polished (with tighter movement and less enemies clipping into each other), and injuries heal much more slowly over time unless you invest in skills to heal them faster.  A more refined experience than the base game, though it still suffers from its most prominent faults - a low budget and generally repetitious design being the most glaring ones.  Still, fans of large scale combat sims and history buffs should have some fun with this one. 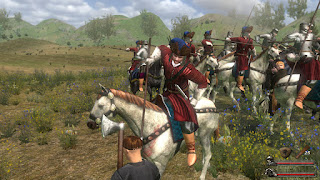