X-COM is an undeniable PC classic, melding business simulation and turn-based tactical combat together in fine fashion, but its sequels were more of a mixed bag, ranging from decent to amazingly bad.  The 2012 remake finally did the name some justice, but some were left disappointed by the more streamlined design it presented.  Xenonauts was a fan-created answer to that, striving to re-create the original game's design in most every respect, especially its focus on granular movement and actions during battle.  Some new elements do get added, though - shooting down UFOs is now a tactical combat element in itself (as opposed to being largely automated in the original game) and you eventually gain the option to airstrike crash sites instead of sending in your troops, which spares you the risk of ground combat at the cost of only recovering a fraction of the resources.  Perhaps most welcome, though, is that crash site missions don't always have to entail painstakingly searching every last nook and cranny to find that single straggling alien on the map - if you capture the UFO and hold onto it for five turns, you automatically win the mission.  Supporting Steam Workshop also allows you to create or modify weapons, gear, portraits, mission types and make any other tweaks you may like, adding plenty of replay value on top of a deep base game. 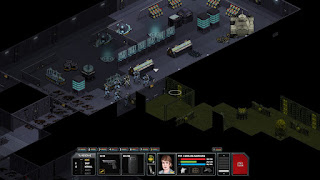