After a number of spinoff series and offshoots into other genres (like the Raidou Kuzunoha series), it was decided that the next Shin Megami Tensei entry would be more of a throwback, returning the series to its first person dungeon crawler roots but retaining a few of its modern sensibilities.  Fortunately, also having another first person dungeon crawler franchise in their publishing stable made the process easy - Atlus teamed up with Lancarse (the name behind the first two Etrian Odyssey games), and fittingly, the game utilizes a very similar two-screen setup with the minimap on the bottom, though you don't have to draw in your own maps this time.  While others of the same model would follow (notably the Persona Q spinoff series), this one was very much based on classic SMT - negotiating with demons is a big part of the experience, with moon phases factoring into their mood.  Dungeons are also rife with traps and puzzles that are required to progress, with frequent random encounters and long stretches between save points.  Customizing one's party is also a key strategic element, as the Press Turn system from Nocturne remains in place (basically, you and your enemies both get free turns from exploiting elemental weaknesses), and bosses are mecilessly tough as per series standards, requiring a perfectly honed party and, of course, plenty of level grinding to overcome (particularly the last boss; if you haven't spent hours or even days honing your party, you have no chance).  Basically, this one is built for a very specific audience of die-hard dungeon crawlers; if you enjoy that kind of game, you'll probably have some fun here, but if not, skip it. 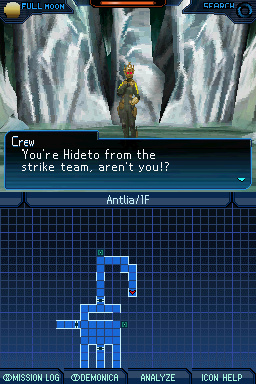