SaGa as a series was always inspired more by old western computer RPGs than anything Japanese, and Romancing SaGa 3 is a perfect example of that - it's very open-ended and doesn't hold your hand at all.  Talking to townspeople, following quest leads, finding and recruiting characters, learning which ports will take you where and which areas you're strong enough to tackle and which to avoid are all essential elements of the experience.  This did also introduce the series' LP system (as long as a character has LP, they can be revived mid-fight and continue fighting; if the protagonist's LP ever hits 0, though, it's game over), as well as large-scale war battles, which are a novel if not particularly deep element.  There's a lot to learn and a lot of frustration as you do it, but Romancing Saga 3 proves to be a very deep and rewarding experience if you give it a chance. 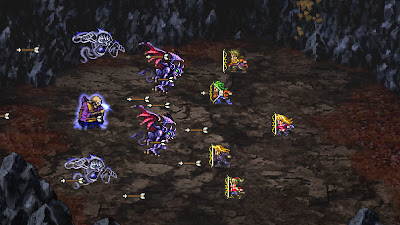