Romancing SaGa 2, like its predecessor, is an open-ended experience with a heavy emphasis on random chance - your learned combat skills are randomly "sparked" mid-fight, while stats are somewhat random based on your actions in battle.  The gimmick this time, however, is that you're not just playing as one hero, but as a whole lineage of them - the first king (and playable character) is fatally cursed by his foe, but his heir inherits all of his learned skills and stats and carries on where he left off, and every few years (or upon that character's death), you begin another round as a new protagonist, and so on and so forth.  Completing quests slowly allows your kingdom to conquer new territory and research new weapons and spells, giving you a leg up for later quests.  A pretty novel concept, and it's not especially deep, but it definitely makes the game stand out despite its frustratingly frequent battles and the series' usual uneven difficulty. 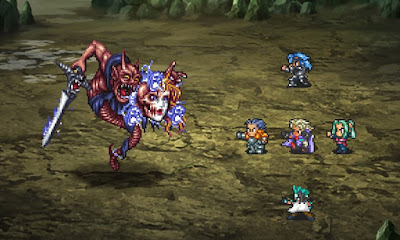