Yet another game in the indie retro-style metroidvania format, Alwa's Awakening is just another one that seems to have little-to-no appreciation for the games it's allegedly paying homage to and just uses the aesthetic to get easy sales.  Whereas classic puzzlers in this format had a sense of constant discovery in their deceptively deep mechanics that were easy to learn but very tricky to master, Alwa's Awakening starts at bare-minimum and rarely ever tries for more.  The gameplay's far too simple, with very few platforming puzzles, obstacles or enemies that require any thought or planning to overcome, and any problems you're presented with non-apparent solutions inevitably have them spelled right out for you, which quashes any satisfaction you get from solving them yourself.  There's little sense of progression as you get no health upgrades or new weapons and only three spells, and they're all as generic as can be - creating blocks and floating bubbles to serve as platforms, and a long-ranged projectile that fires in a straight line.  You can't even use spells in tandem in any clever way - they all run off the same magic bar and you can only use one when the bar is full, which ruins a lot of fun ideas that could have been done with them.  Imagine if you could, say, create several strategically placed bubbles/blocks to cross a long gap, or redirect a lightning shot with a bubble or block to activate something you couldn't hit with a straight shot, or even set a block atop a bubble to push a switch that the bubble alone couldn't; any of those would add a lot more depth and variety to the game than what we get here.  The game even goes so far as to reference the classic action-puzzler Solomon's Key in the achievement names, which only further exemplifies the problem: why didn't Alwa's developers bother to take any cues from that game's design?  Alas, creativity was passed up in favor of rote filler - there's 99 collectibles to find and an achievement for speedrunning the game in under two hours with less than five deaths, like it's just going through a checklist of every boring modern gaming trope engineered to add a few more hours to your play counter and points to your trophy list rather than provide any genuine entertainment.  Alwa's Awakening does at least feature some nicely detailed graphics and catchy tunes, but as a big fan of retro titles and puzzle games, this one just wasn't intelligent or captivating enough to hold my attention for long, perfectly exemplifying of the old axiom of "pretty graphics and music can make a good game better, but they can't make a bland game fun."  If you want some classic retro action-puzzler games, there's plenty of great ones to pick from - Adventures of Lolo, Willow, Kickle Cubicle, Zelda 1 and 2, Metroid, Legacy of the Wizard, Battle of Olympus, Lemmings, Faxanadu and the aforementioned Solomon's Key to name some off the top of my head.  Or if you want some good modern takes on the format, play Shovel Knight, Blaster Master Zero, Axiom Verge, Shantae or Celeste. 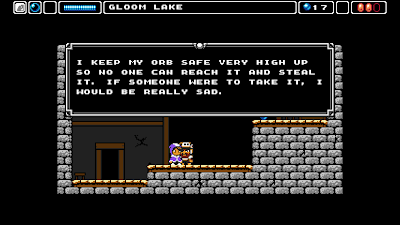